To share your memory on the wall of Beata \"Bea\" Jorn, sign in using one of the following options:

Bea was born December 26, 1929 at Loup City, NE to James and Monica (Zauha) Iwan. As a Child she lived at Loup City, Clarks and Pierce Chapel, NE. She also lived at Columbus, Lincoln and Norfolk before coming to Fremont in 1961. She married Boyd “Leyon” Jorn on October 26, 1957 at St. Bonaventure Catholic Church in Columbus, NE. Leyon preceded her in death on October 13, 2014. Bea worked at Fremont Sanitation, Woodcliff and was the bookkeeper for Jorn’s Diesel Service in Fremont.

She was a member of St. Patrick Catholic Church in Fremont and V.I.P. Visual Impaired Persons and was their former secretary.

Mass of Christian Burial, 11 AM, Thursday, December 3, 2020 at St. John the Evangelist Catholic Church in Valley. Fr. Lloyd Gnirk will officiate. Visitation will be from 10-11 AM Thursday at the church prior to the mass
.
In lieu of flowers memorials to Breast Cancer Research or American Legion Post #20 in Fremont.

Receive notifications about information and event scheduling for Beata "Bea"

We encourage you to share your most beloved memories of Beata "Bea" here, so that the family and other loved ones can always see it. You can upload cherished photographs, or share your favorite stories, and can even comment on those shared by others.

Flowers were purchased for the family of Beata "Bea" Jorn. Send Flowers

Posted Nov 28, 2020 at 03:29pm
To my old roommate Gini , sorry for your loss but I always remember waiting on both your mom and dad are at the hardware store they were fun people
Comment Share
Share via:
BB

Posted Nov 27, 2020 at 11:44pm
I met Beata at St Rose Catholic Church in Omaha, Nebraska. I was in the bathroom filling a squirt gun full of water. Beata came into the bathroom and just gave me a funny look. I explained it was for keeping the singer (Mic) I in line. After mass, Mic introduced me to his mother. We had a good laugh.
Comment Share
Share via: 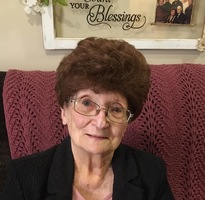