To share your memory on the wall of Byron Hansen, sign in using one of the following options:

Byron was born in a blizzard on February 2, 1936, in Fremont, to Marvin and Sarah (Pascoe) Hansen. He graduated from Fremont High Sc... Read More
Byron Hansen, 84, of Fremont, NE, passed away Monday, December 28, 2020, at Methodist Fremont Health.

Byron was born in a blizzard on February 2, 1936, in Fremont, to Marvin and Sarah (Pascoe) Hansen. He graduated from Fremont High School in 1954. After school Byron served in the U.S. Navy as a “Seabee”from 1955 until 1961. He was living in California during his time in the military. Byron married Marilyn Sanders on February 26, 1956, in North Platte, NE and they raised 4 children.

Byron and his wife, Marilyn owned and operated 2 successful businesses, Commercial Roofing and The Sunshine Tavern in Fremont for over 4 decades. He enjoyed many working trips over the winters to Texas and the two of them enjoyed many leisure trips to Las Vegas and to visit family in Arkansas. Byron enjoyed playing cards, dice, horse racing and gambling while socializing and wearing exotic cowboy boots. He also had quite the collection of fine cowboy hats. Byron was a member of the American Legion and VFW in Fremont. Many things brought Byron joy, but perhaps the thing he loved most was spending time with his family and friends.

Byron was preceded in death by his parents; son, Skip Hansen; and son in law, Leland “Beep” Frazier

Celebration of life service will be held at a later date. Burial with military honors will be at Memorial Cemetery in Fremont.

Online condolences may be left at www.mosermemorialchapels.com

Receive notifications about information and event scheduling for Byron

We encourage you to share your most beloved memories of Byron here, so that the family and other loved ones can always see it. You can upload cherished photographs, or share your favorite stories, and can even comment on those shared by others.

Posted Dec 30, 2020 at 03:20pm
sorry to hear about byrons passing------i served on the village board in bancroft ne. for 20 years and we had byron and Pink tar the cracks in our streets every year and he was most certainly an utmost honest man and i enjoyed doing business with him i know he will be sadly missed but he was im sure an amazing husband--father--grandfather and freind to many----My prayers are with you all----Mike Wegner!!!!!!!!!!!!!!!!!!!!!!
Comment Share
Share via: 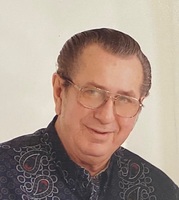