To share your memory on the wall of Carolyn Anderson Macklin, sign in using one of the following options:

She was a 1953 graduate ... Read More
Carolyn Anderson Macklin, 85 years, of Fremont, NE died November 11, 2020 at the Hooper Care Center in Hooper, Nebraska. Carolyn was born June 17, 1935 in Fremont, Nebraska to Sam and Mary (Gloser) Chudomelka.

She was a 1953 graduate of North Bend High School in North Bend, Nebraska and a 1957 graduate of Wayne State College in Wayne, Nebraska. She also attended the former Midland Lutheran College in Fremont. Carolyn taught in the Fremont Public School system and for rural School District 78 in Dodge County.
Carolyn married Duane L. Anderson on December 27, 1956 at St. Patrick Catholic Church in Fremont. Duane died July 9, 1975. She then married Bob Macklin on February 12, 1983 in Fremont and he died March 4, 2017.

Carolyn lived at Ames, Nebraska until 1987 when she moved to Fremont. She was a member of St. Patrick Catholic Church and St. Joan of Arc Circle. She also was a member of V.F.W. Auxiliary of Post 8223 of North Bend, Fremont Newcomers Club, Valley View ladies and couples golf leagues.

She was preceded in death by her parents, 2 husbands; son, Greg Anderson; brother, Armand Chudomelka and step-daughter-in-law, Anne Macklin.

Memorials are suggested to the Bridge in Fremont.

Receive notifications about information and event scheduling for Carolyn

We encourage you to share your most beloved memories of Carolyn here, so that the family and other loved ones can always see it. You can upload cherished photographs, or share your favorite stories, and can even comment on those shared by others.

Love, Matt, Megan, & Kayla, Julie Meister Shay, and other have sent flowers to the family of Carolyn Anderson Macklin (Chudomelka).
Show you care by sending flowers

Posted Nov 17, 2020 at 01:30pm
So many wonderful memories of being together as farm families. Remembering the beautiful, gracious woman we knew as Carolyn.

Posted Nov 14, 2020 at 08:12pm
Am so sorry and sad to hear of Carolyn's passing. I got to know Carolyn at Nye Legacy when visiting my Mom. She was really a joy to talk to and a very sweet and caring person to my Mom and to all. My thoughts and prayers are with her and her family. Karen Costello
Comment Share
Share via:
J

Posted Nov 13, 2020 at 12:50pm
Carolyn was a dear friend to our family, and exceptionally close with my mom. We have many happy memories of the Anderson family visiting our farm, or of us visiting your farm. It was a tradition to spend the 4th of July together!
I have a fond Carolyn memory, of Carolyn taking a babysitting job to watch five year old Julie and I, while the rest of the family went on vacation. I remember having a fun time on our 'vacation' at the Anderson farm, and enjoying great food! We really had fun making a mud pie in the middle of the lawn, which showed that Carolyn had a lot of patience and would put up anything to help out a friend!
She is a beautiful woman, inside and out. Our mom took us to visit her, whenever should could, and I know my name is in her famous guest book. What a privilege it is to be, in that guest book. Bless you all.
Comment Share
Share via:
D

Posted Nov 13, 2020 at 12:30pm
Carolyn was a friend to my mom while my mom was at Nye Legacy. Carolyn was a delight to talk too. I visited my mom every Saturday and brought treats in and always included Carolyn. Carolyn told me many stories about her life and I always enjoyed her conversation. I am saddened to hear of her passing. She was a sweet person! I send my sympathies to her family! Diane Essink/Lincoln, NE
Comment Share
Share via: 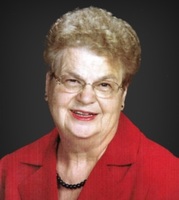