To share your memory on the wall of Charles White, sign in using one of the following options:

Charles was a member of First Congregational Church, U.C.C. of Fremont. He was an avid fisherman and enjoyed bowling. He was named Senior Bowler of the Year in 2002 & 2003 and was inducted into the Fremont Area Bowlers Hall of Fame in 2015, at the age of 98.

He was preceded in death by his parents; wife; son, Jim; granddaughter, Jodie Lange; and 10 brothers and sisters.

Funeral service will be 11:00 A.M., Monday, March 22, 2021 at First Congregational Church, U.C.C. in Fremont (Masks Required). Visitation on Sunday from 4 PM to 7 PM at Moser Memorial Chapel in Fremont and continues on Monday at church 1 hour prior to service. Burial will be at Memorial Cemetery in Fremont. Memorials may be given to the church.

Receive notifications about information and event scheduling for Charles

We encourage you to share your most beloved memories of Charles here, so that the family and other loved ones can always see it. You can upload cherished photographs, or share your favorite stories, and can even comment on those shared by others.

Posted Mar 19, 2021 at 10:42am
I am sorry to read about your father Bill. I am pretty sure your parents lived on the farm north of North Bend when I was in high school there. I grew up living 2 miles north of No.Bend. THEN..when I taught at M.Park, he lived across the street from the school. I would see him, and his boat, taking off on a fishing adventure.
That photo of his BIG smile is TOPS. You have many, many good memories of your father.
Comment Share
Share via:
LB

Posted Mar 18, 2021 at 09:03am
Judy and Jerry; Sunny and Bill: Sincere sympathy in the loss of your Dad. His smile is as it was so many years ago....and hard to realize how many years have passed since first working with Judy; then having her Mom help make the bridesmaid dresses for my wedding (in which Judy was a part). I remember both of them with loving smiles each time I saw them. May it comfort you to know that others care and understand the loss of a parent. Doni Brainard
Comment Share
Share via:
KW 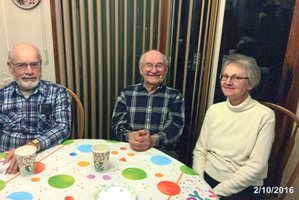