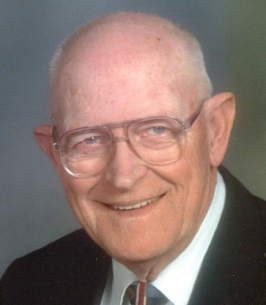 Charlie, as he was always known as, was born on December 15, 1927 in Wahoo, Nebraska, the son of Ervin and Vivian Wild. He was a life-long resident of Fremont and Saunders County. He attended school at Carey High in Saunders County through the tenth grade and graduated from Fremont High School in 1945.

He met the love of his life, Colleen Johnson through 4-H: they were wed on August 17, 1949 at the First United Methodist Church in Fremont and were married for 71 years until her passing in 2020.

He farmed in Saunders County for about ten years until he was injured in an accident. He graduated from the Commercial Extension School of Commerce in Omaha, NE as an Accountant. He worked at Blevin’s Pops-Rite Popcorn, North Bend, NE, and later was Corporate President of Buckridge, Inc. in Fremont for many years. He then worked for Sid Dillon for over 25 years.

He was an active member of the First Baptist Church in Fremont and was also active with Pohocco Baptist Church, Calvary Baptist and Christian Alliance Church.

Charlie and Colleen were avid travelers and visited 49 states and 7 European countries. They loved their campers and took many road trips. Charlie had just returned from a visit to Colorado to see his nephew and wife, Bob & Barbi Wild. A member of the Nebraska Antique Power Association, Charlie loved antique tractors and enjoyed going to Allis Chalmers tractor shows and showing his tractor.

Charlie also enjoyed music, playing the piano and harmonica and often entertained fellow residents at Nye Square. He fondly remembered playing the tuba and harmonica in his uncle Paul Vasholz’s Clown Band in the 1940s.

In addition to his parents, Charlie is preceded in death by wife Colleen Wild; brothers, Donald E. Wild and wife Hope; Kenneth Wild and wife Marguerite; and Herbert Wild.

He will be greatly missed by his family and many friends. He is survived by brother Fred Wild and wife Shirley; and brother-in-law William Johnson and wife Del, all of Fremont; twelve nieces and nephews and many great-nieces and nephews.

Funeral service will be held Wednesday, July 20, 2022 at 10:00 AM at Moser Memorial Chapel in Fremont, NE. Visitation will be Tuesday evening from 5:00-7:00 at the funeral home. He will be laid to rest with Colleen at Ridge Cemetery in Fremont.