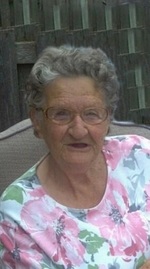 Ilse was born on September 8, 1926 in Trebbichau, Germany to Edgar and Elisabeth (Dinter) Kuhnt. She grew up and attended school in Germany. She married Bernard C. Howard on September 16, 1959 in Aschaffenburg, Germany. He preceded her in death on June 25, 1998. She and Bernard came to the US and lived in Oklahoma from 1962-1975 when they moved to Scribner, NE. While in Scribner they owned and operated Howard Roofing and the Scribner Café. In 1997 they came to Fremont. She was a house parent at the Masonic-Eastern Star Home for Children in Fremont for 17 years before retiring in 2001.

She was preceded in death by her parents; grandparents that raised her; husband; sister, Gertrude; and grandson, Matthew Meyer.

Per Ilse’s wishes, A Private Family Funeral will be at Moser Memorial Chapel in Fremont, followed by burial at Ridge Cemetery in Fremont.