To share your memory on the wall of Jean Wrage, sign in using one of the following options:

She graduated from Genoa High School in 1942. Jean taught school in a 1 room schoolhouse before moving to Omaha. She married Ray Wrage on April 10, 1949 in Genoa, NE. The couple lived in Scottsbluff, NE., Grand Island, NE., Holdrege, NE., Broken Bow, NE., and finally settled in Fremont in 1963. Jean worked for Greens Greenhouse, Phillips Department store, and Jean and Ray ran the 30 Bowl for three and a half years. She was a member of First United Methodist Church in Fremont, the Elks Club, and was in the Sarah Circle at church. She enjoyed her church family and spending time with her friends, especially her special friend, Joann Morgan. She also enjoyed crocheting and embroidery.

Visitation will be from 12-2 PM on Tuesday, February 23, 2021 at Moser Memorial Chapel in Fremont.

A 2:00 PM Graveside Service will follow the visitation at Memorial Cemetery in Fremont.

Memorials may be directed to the Fremont Habitat for Humanity.

AJ and Jay Marie Workman sent flowers to the family of Jean Wrage.
Show you care by sending flowers

Posted Feb 26, 2021 at 04:48am
We enjoyed visiting with her at the annual Ericson reunions. This sweet relative will be missed. Jean was a 1st cousin to my dad..
Comment Share
Share via:
JM

Posted Feb 25, 2021 at 07:51am
I remember Jean coming to our house to visit with my mom and showing her the Avon catalog. My mom enjoyed the visit but she always bought things too. They also worked together at Philips Dept. Store. I would see her at the grocery store and catch up with her when she still lived at home and she told me that she would go to the nursing home and visit with the residents. She was such a friendly and caring person. I will always remember her infectious smile. I'm so sorry for all of you. Judi (Bales) Main
Comment Share
Share via:
BG

Posted Feb 22, 2021 at 04:24pm
So sorry to have seen That Jean passed, known her for many years, may she rest In Peace. Prayers for all of her family.
Comment Share
Share via:
S

Posted Feb 21, 2021 at 02:12pm
So sorry to hear of Jean’s passing. Jean was my mother’s (Vera Mae Ericson Peterson) cousin and I was named after her....Sandra Jean. She lived with us a short time in Fremont. I remember she always had a bright smile for everyone.
Comment Share
Share via:
JH

Posted Feb 21, 2021 at 01:50pm
Jean lived next door to my mother Joey Schwanke for many years. She was a constant help to my mother
and she worked at the Greenhouse. She was always cheerful and she loved to go to Church. She did a lot
of crocheting and embroidery handiwork for the church circle and she gave her time and her talent. She was
loved by all. May she rest in peace. JO HEINZ
Comment Share
Share via: 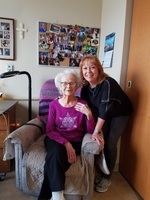 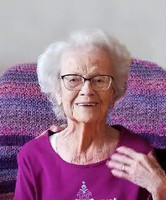 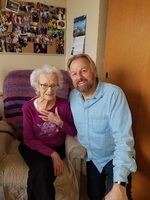