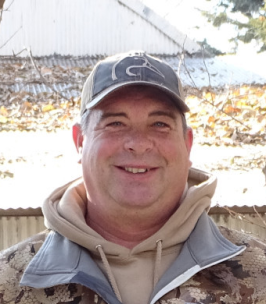 He was born on September 6, 1976 in Wahoo, NE to Terry and Lorie (Winkelman) Hermanson.

Jeff was a dedicated member of the Cedar Bluffs Volunteer Fire Department and Ducks Unlimited, serving in both the Wahoo and Fremont Chapters. He enjoyed camping, fishing and hunting.

Jeff married his high school sweetheart and love of his life, Cindi Townsend on April 29, 2000. They welcomed two sons to this world, Brayden Lee (17) and Carter Thomas (13). As a family they spent countless days camping, fishing, hunting and making memories they will always cherish.

Jeff was no stranger to anyone he met, quickly making you a friend. He loved to entertain and make everyone laugh. His ability to light up a room will be greatly missed.

He had many special hunting buddies, but none more priceless than his son Carter.

He is survived by his wife, Cindi; sons, Brayden and Carter, and hunting dog Brewsky of Cedar Bluffs, NE; parents, Terry and Lorie Hermanson; brother, Matt Hermanson; sister, Theresa (Parker) Stenger; grandparent, Vergie Winkelman; parents-in-law, Tom and Sue Townsend; brothers-in-law, Kevin (Sheena) and Dan Townsend; nieces and nephews; his duck hunting boys; best of friends, Cody and Annie Kavan; and many other good friends he made over the years.

Jeffrey was preceded in death by his Uncle and mentor Chris Winkelman; grandparents, Gayland and Millie Hermanson and Richard G. Winkelman; and his K-9 partner, Rudy.

Funeral Service is 11:00 A.M., Tuesday, June 28, 2022 at Cedar Bluffs City Auditorium. Visitation will be from 10 A.M. to 11 A.M. Rev. Scott Jensen will officiate. Burial will be at Pleasant View Cemetery at a later date.

Memorials may be made to the family for future designation.

Online Condolences may be left at www.mosermemorialchapels.com.