To share your memory on the wall of JoAnn Engel, sign in using one of the following options:

She grew up in Fremont, Nebraska and graduated from Fremont High School in 1948. JoAnn and her husband, Jack were married in 1953. From 1950–1960 she was a secretary for Nebraska Natural Gas Company and was a 50-year member of the Daughters of American Revolution. JoAnn cooked many delicious meals on the farm for her family and brought snacks out to the fields during hay season. Most famous in her variety of recipes were cookies. Her sons often say it would be interesting to know just how many cookies she made in a lifetime. They estimated once it was well into the 100’s of thousands.

JoAnn enjoyed water classes at the YMCA, drinking coffee with her friends and being a very active member of the St. James Episcopal Church and Alter Guild. Over the years, she enjoyed several family outings and was able to spend every Holiday with family and was rarely alone, with one of her son’s family living next door and frequent visits from others. She also helped as a backup babysitter to her grandchildren, during which she enjoyed teaching them how to cook, set tables, polish silver together, yardwork, gardening, as well as passing on life lessons and proper manners. JoAnn especially enjoyed spending time with her long time friend, Barbara Yost. The two spent much time going shopping, going out to lunches, and staying up till early morning hours talking every time she came to visit.

On August 27Th, 2019, JoAnn and Jack celebrated their Wedding Anniversary together. However, that evening, she took a bad fall in her farm home and broke her shoulder and her hip. It was determined it was not safe for her to return to her home due to memory issues she was having that were progressively getting worse. Therefore, in October of 2019 she began living in a very nice big room at the Shalimar Memory Center. They provided great care to JoAnn in this facility where she was able to be safe and not get hurt again.

JoAnn had frequent visits at Shalimar from family and friends. During the trying times of 2020, the Hospice nurses provided massages, whirlpools baths, music therapy, reading books to her as well as getting her hair done weekly. She also enjoyed receiving and reading many of the letters she received form her loved ones.

JoAnn woke one day and decided it was time to reunite with the love of her life and the other loved ones that have passed before her. She didn’t say goodbye without one last visit from each of her family members just within the last week preceding her departure. JoAnn is overjoyed to be reunited with her husband, Jack Engel; brother, Don McKennan; and her parents, Joseph and Nina McKennan.

Funeral Service is 11:00 A.M., Friday, May 21, 2021 at St. James Episcopal Church in Fremont, NE. Visitation is 5-8 PM, Thursday, May 20 at Moser Memorial Chapel in Fremont. There will be a dinner for everyone, following the funeral service, at the Delaney Hall at St. Patrick Catholic Church in Fremont. (3400 East 16th Street) A Private Family interment will take place at a later date in Ridge Cemetery.

Online Condolences may be left at www.mosermemorialchapels.com.

Receive notifications about information and event scheduling for JoAnn

We encourage you to share your most beloved memories of JoAnn here, so that the family and other loved ones can always see it. You can upload cherished photographs, or share your favorite stories, and can even comment on those shared by others. 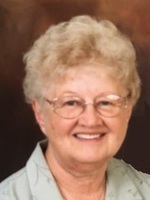