To share your memory on the wall of Pat Smith, sign in using one of the following options:

Print
Pat Smith, age 87, of Arlington, Nebraska, passed away Thursday, December 31, 2020 at the Hooper Care Center. She was born August 17, 1933 in Liberty, NE to Henry and Hilma (Breunsbach) Eckert.

Pat grew up at Valley, Nebraska and was a ... Read More
Pat Smith, age 87, of Arlington, Nebraska, passed away Thursday, December 31, 2020 at the Hooper Care Center. She was born August 17, 1933 in Liberty, NE to Henry and Hilma (Breunsbach) Eckert.

Pat grew up at Valley, Nebraska and was a 1951 graduate of Valley High School. She attended Cornhusker Beauty School in Fremont and later taught there. Pat married Clarence “Jack” Smith in 1952 in Valley, Nebraska. Jack preceded her in death on August 5, 1992. She was primarily a homemaker but did own Brides Formal Affair for about 13 years and was a seamstress out of her home for many years.

Pat was a former member of Fremont Church of Christ and loved playing bridge.

Interment will be at Arlington Cemetery in Arlington, NE.

Receive notifications about information and event scheduling for Pat

We encourage you to share your most beloved memories of Pat here, so that the family and other loved ones can always see it. You can upload cherished photographs, or share your favorite stories, and can even comment on those shared by others.

Posted Jan 07, 2021 at 06:27pm
Thinking of you all. I remember Pat telling me and my sister, “when you get old...you want to cut your hair short, since gravity is already pulling everything else down!” I think of her so often when I am brushing my hair. Sending my love and sympathy. Cherish the memories 😘
Comment Share
Share via:
RF

Flowers were purchased for the family of Pat Smith. Send Flowers 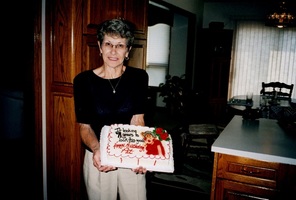