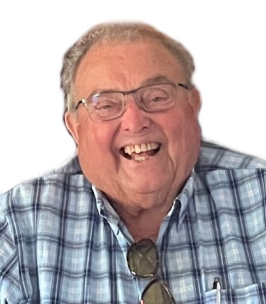 Dick was born August 25, 1936 to Leroy and Christina (Toelle) Benne in West Point, NE. He attended
Guardians Angels and Central Catholic High School in West Point, class of 1954. In 1956, Dick served in
the United States Army and continued to serve his country in the Army Reserves until 1969. On
September 9, 1958, Dick Married Rosemary Goeken. The couple resided in Fremont since their marriage.
Dick worked as an Insurance adjustor throughout Eastern Nebraska for Shelter insurance and retired in
1999.

Dick loved his family very much. He also enjoyed watching NASCAR and being a handyman. Dick was a
automobile enthusiast. He loved buying and selling cars over the years.

He was preceded in death by his parents; and wife, Rosemary.

Dick was a member of St. Patrick Catholic Church in Fremont.

Funeral Mass will be 10 A.M., Monday, November 7, 2022 at St. Patrick Catholic Church in Fremont.
Visitation will be Sunday from 4-6 P.M., with a Rosary at 6 P.M. at Moser Memorial Chapel in Fremont.

Interment will be at Calvary Cemetery in Fremont.