To share your memory on the wall of Ruth Eggers, sign in using one of the following options:

Ruth was born May 24, 1923, at Fort Wayne, Indiana to Otto and Clara (Lahrman) Fuhrman. She was baptized on May 28, 1923, confirmed on March 21, 1937 and attended parochial school at Emmaus Lutheran Church in Fort Wayne. She was a graduate of South Side High School of Fort Wayne. Ruth worked as a secretary at General Electric Company, also held a civil service position and was an executive aid for Boy Scouts of America for several years, all in Fort Wayne. Ruth married Harvey H. Eggers on August 18, 1945 at Fort Wayne. The couple moved to the Eggers family farm southwest of Cedar Bluffs Nebraska and lived there from 1945 to 1967, when they moved into Cedar Bluffs. They moved to Fremont in 1984 and wintered at Pharr, Texas from 1985 to 2003. Ruth volunteered to teach porcelain doll making and taught 4th grade Hispanic children in the “Host” program, while in Pharr.

Ruth was a member of Good Shepherd Lutheran Church in Fremont, the Lutheran Women’s Missionary League, and the Tabitha Society. She was a former member of St. Matthew Lutheran Church at Cedar Bluffs, the Altar Society, Lutheran Women’s Missionary League and the Ladies Aid Society where she held various offices, taught Bible classes and catechism for confirmation classes. She was a former superintendent of Saunders County Fair at Wahoo Nebraska, South Cedar Extension Club for over 45 years and served on the State Extension Board at Lincoln, as State Historian. Ruth was a former vice president and secretary of the local extension board at Wahoo, member of American Legion Auxiliary of Post 158 at Cedar Bluffs and held many offices and member of 8 & 40, Dodge County Salon #358. She served on the Dodge County Board of Thrivent Financial for 4 years and volunteered at Methodist Fremont Health in the surgical waiting room.

The funeral (with live streaming available at www.mosermemorialchapels.com) will be 10:00 AM, Saturday, February 6, 2021, at Moser Memorial Chapel in Fremont with Rev. Ryan Ankersen officiating. Visitation will be one hour prior to the service at the funeral home. Burial will be at Memorial Cemetery in Fremont.

Memorials may be directed to American Legion Auxiliary Post 158 in Cedar Bluffs or Good Shepherd Lutheran Church in Fremont.

Receive notifications about information and event scheduling for Ruth

We encourage you to share your most beloved memories of Ruth here, so that the family and other loved ones can always see it. You can upload cherished photographs, or share your favorite stories, and can even comment on those shared by others.

Don, Beth, DJ & Kate Kitson, Colleen Chapp, and other have sent flowers to the family of Ruth Eggers.
Show you care by sending flowers

Posted Feb 05, 2021 at 07:30pm
Aunt Ruth,
I am saddened to hear of your passing. I have fond memories of you, Uncle Harvey, papa, and grandma wintering in Texas. Papa, Douglas, and I would ride bikes to your homestead and say hi. You and Harvey were always ready with a warm smile and of course a cookie! I will miss your gentleness and wisdom.

Tiffany and Will,
My heart is breaking for you.

Posted Feb 04, 2021 at 11:37am
Aunt Ruth - my earliest memories are you chasing me around to smother me with kisses. I never won that race, Love Dave Dave & Laura Fuhrman

Gracious Lavender Basket was purchased for the family of Ruth Eggers. Send Flowers

Posted Feb 03, 2021 at 10:37am
Ruth was such an example of a gentle Christian woman. She truly loved to support church projects such as Vacation Bible School and would always make sure she could donate anything she had and make cookies for the children. She loved to show those that visited her dolls and paintings. My father and she were 'almost' birthday pals as she would say as they were born the same year and just two days apart. Would love to hug you one more time and will again some day. 'Death is swallowed up in victory.' 1 Corinthians 15:54. Lynette Oakes
Comment Share
Share via: 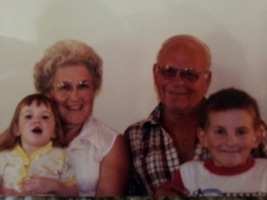 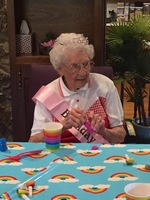 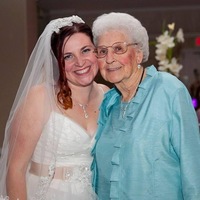