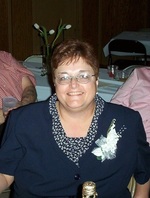 Shirley A. Miller (Saylor) passed away on February 12, 2022 at Methodist Fremont Health. She was born on August 2, 1954, in Fremont, Nebraska to Priscilla and Robert Saylor.

Shirley grew up in Fremont and graduated from Fremont High School in 1972. Shirley was employed at a few different places, one was K-Mart, and she enjoyed her time there.
Shirley's real calling was being the best grandma. In 2008, Shirley quit everything to devote all her time to take care of Kelly who is Shirley’s daughter in law. Taking Kelly to her doctor appointments and making sure that the Millers were ready for the first-born grand baby’s which she was incredible at. In 2009, she stepped up to the plate by caring for her twin grandsons. Shirley got up before the sun and went home many days after the sun went down to take of her boys, Tyeson & Maddox. Shirley knocked it out of the park taking care of the boys. I hope she knows that. Shirley loved those boys more than life itself. Shirley had 5 grandkids that she loved so much, Maddox, Tyeson, Sam, Saylor, and Annette. These 5 kids were the light in Shirley’s eyes!

Shirley was a recovering Alcoholic of 38 years and very proud to belong in AA.
This is where Mark and Shirley found each other. After a very short time, they found that they could lean on each other for support when times got rough. Eventually Mark and Shirley fell in love.
On November 5, 1988, they got married in Fremont, NE at First Christian Church. Shirley finally found someone that cared so much for her. Mark would do anything for Shirley and she would do anything for Mark. They had an absolutely amazing bond. On August 18, 1989, in Fremont, NE, Shirley gave birth to Zach Miller. Zach was Shirley's little miracle child. She loved Zach so much and would do anything for Zach.

When Shirley was a child, she enjoyed attending church camp and helping her father with boy scouts. Shirley and her dad had a special bond. They shared a love of waterfalls so much, that Robert built Shirley a beautiful working waterfall in the front yard of the family home. It was amazing! Shirley helped her dad do everything from traveling across the United States, collecting rocks to build the waterfall, baking cakes and painting the house she was there to help. This explains Shirley's character, SHE LOVED TO HELP! When Shirley wasn't helping someone, she loved to get lost in a good book, preferably Steven King, finding a nice shady park to take Maddox & Tyeson. Also singing along to her favorite song or even looking for a beautiful rainbow. Shirley and Mark often found themselves driving into other states on a Saturday afternoon looking for a bird they had never seen before. They both loved to bird watch. Shirley enjoyed being a second mom to Josh and Zach’s friends. Shirley was a wonderful Sister or a second Mom to her sisters she loved you guys more than you'll ever know!

Shirley is survived by her husband, Mark; sons, Josh (Kelly) Miller and Zach (Amanda) Miller:
sisters, Joanne (Jim) Hart and Becca (Mitch) Ott all of Fremont; several nieces and nephews; and
The most important are her grandchildren, Maddox, Tyeson, Sam, Saylor, Annette.

Shirley is preceded in death by her parents; brother, Dan Saylor and infant grandson, Alex.

Shirley will always be remembered for her big heart, wanting to do anything for anyone and never being judgmental and always telling Josh it will all workout! “I Love you Grandma” Saylor says