To share your memory on the wall of Walter Graham, sign in using one of the following options:

Walter grew up in Nebraska City, NE and lived at Portland, Oregon and Omaha prior to settling in Tekamah, NE. He served in the US Army during World War II from October 31, 1943 to June 30, 1945 in England and Germany. Walter married Dolores June O’Connor on May 18, 1946. He was a carpenter, electrician and a machinist at Vicker’s Inc. in Omaha.

Memorial Service will be 2 P.M., Wednesday, January 20, 2021 at Moser Memorial Chapel in Fremont. Rev. Scott Jensen will officiate. Military Honors will be conducted by the Fremont Honor Guard of VFW Post #854 and American Legion Post #20 following the service.

Interment will be at the Omaha National Cemetery in Omaha.

Online condolences and live-stream at www.mosermemorialchapels.com.

Receive notifications about information and event scheduling for Walter

We encourage you to share your most beloved memories of Walter here, so that the family and other loved ones can always see it. You can upload cherished photographs, or share your favorite stories, and can even comment on those shared by others.

Kcee Graham, Walt, Linda, Amy and family, and other have sent flowers to the family of Walter Graham Jr.
Show you care by sending flowers

Posted Jan 19, 2021 at 11:19pm
In honor of our great grandfather Walter graham, we honor him with these flowers. we all love you. watch over us and keep us safe.

Posted Jan 19, 2021 at 09:14pm
Junior was a man who lived to fish and loved to fish.He took the sport seriously and rarely came home empty handed. Fishing the Willamette River for Springer Chinook salmon was his all time favorite way to spend his day.When he’d come home which a bright Chinook salmon he’d be all smiles. And sometimes they’d be up to thirty pounds. He was always ready for his next day on the river.Whether it was in a boat or on a bank it didn’t matter as long as he was trying for his next big catch. He also enjoyed a good home cooked meal. Deserts were his favorite especially pies. Any kind but apple was his favorite. He also enjoyed putting together puzzles or a good game of Yahtzee or poker especially if it included a monitory win.He always made life fun. Always quick witted. Always smiling.So many great memories.He’ll always be close in our hearts and never forgotten.
Linda Graham
Comment Share
Share via:
WF

Posted Jan 19, 2021 at 08:31pm
Our love and thoughts are with all of the family. His memories we will forever cherish. We are sending our love from Oregon.

Posted Jan 18, 2021 at 01:22pm
My memories of Grandpa are of a man that everyone was in awe of. He was deeply respected and everyone went to him when they
needed help. He was always tinkering on cars or remodeling the house. He'd be putting tile in or updating a bathroom, knocking a wall down, or once even put random pieces of carpet squares all over the wall like wallpaper. It was odd, but actually kind of cool. lol...Once when I was little, I was crying over something and he told me that he loved the song I was singing. I remember getting really mad at him and telling him I wasn't singing a song. He just kept saying how much he loved that song and so I deliberately stopped crying so he couldn't hear it anymore. HA!!! I was soooo smart!!! lol.....I hadn't seen Grandpa in a long time, not since I went home for my sisters surgery which has to be around 6 or 7 years now. When I saw him he was telling me jokes and cracking himself up and I thought, now this is a man I didn't know existed. It was nice to see another side of him. I will miss you Grandpa, and it's times like this that I wish I lived closer to home. You were so loved and I'm glad that you are with Grandma again.
Comment Share
Share via:
CE 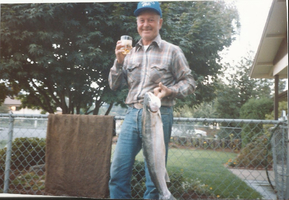 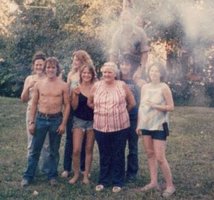 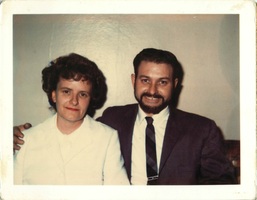 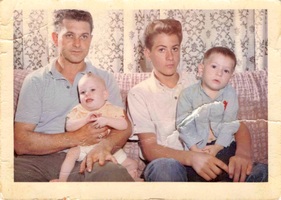