To share your memory on the wall of William Dvorak, sign in using one of the following options:

Bill grew up in Iowa and graduated from Cresco... Read More
William J. Dvorak, 90 years, of Fremont, NE passed away Saturday, May 8, 2021 at Nye Legacy in Fremont. He was born on November 19, 1930 in Cresco, IA to Charles and Nellie (Miller) Dvorak.

Bill grew up in Iowa and graduated from Cresco High School. He worked as Deputy Recorder for Howard County. After Serving in the U.S. Navy from 1951 to 1955, he attended Woodbury College in Los Angeles, CA. He married Ruth Wehrli on September 26, 1953 at San Diego, CA. He moved to Omaha in 1958, he worked for several firms including CPA firms and Manufacturing Companies. In 1971, he began working at Jennie Edmundson Hospital in Council Bluffs. In 1974, he moved to Fremont and retired from Memorial Hospital of Dodge County in 1992 from the position of Vice President of Fiscal Services.

He was preceded in death by his parents; wife, Ruth; brothers, Donald Dvorak, Robert Dvorak, and Gene Dvorak.

Funeral Mass will be 12 P.M., Wednesday, May 12, 2021 at St. Patrick Catholic Church in Fremont. Visitation will be Tuesday from 5 P.M. to 8 P.M. with a Knights of Columbus rosary starting at 7 P.M. at Moser Memorial Chapel in Fremont.

Burial will be at Calvary Cemetery in Fremont.

Memorials may be directed to St. Patrick Catholic Church.

Receive notifications about information and event scheduling for William

We encourage you to share your most beloved memories of William here, so that the family and other loved ones can always see it. You can upload cherished photographs, or share your favorite stories, and can even comment on those shared by others.

Posted May 12, 2021 at 11:27am
Mr. D was one of the best bosses I ever had. I was his secretary at FAMC for 10 years. He had a gentle spirit and kindness not often found these days. Prayers to Barb and family. He is now at peace with his beloved Ruth.
Comment Share
Share via:
LZ

Posted May 11, 2021 at 11:42pm
My uncle Bill was a special guy. I remember his warm, outgoing personality and that big smile and friendly voice. He always seemed to be up for an adventure and had so much youthful energy…. playing tennis, golf, ping pong or water skiing.

I’ll never forget the vacations our families took together. During the 60s and 70s, Bill, Ruth and Barb would pull their boat and meet us in the Ozarks, for a week of camping and boating. What great memories.

Bill had a generous heart as well. When I was in junior high, I recall him giving his time for two boys he sponsored serving as their big brother. As Ruth’s health, deteriorated later in life, Bill was so faithful attending to her at the nursing home.

During my college years in Omaha, I worked for a delivery company and one day when I passed through Fremont, I decided to stop by Bill’s office at the hospital just to say hello. When his secretary notified him I was there for an unannounced visit, he immediately dropped everything and invited me in for a chat. He was always so welcoming …… he always made me feel like I was his special nephew.
-Craig Wehrli
Comment Share
Share via: 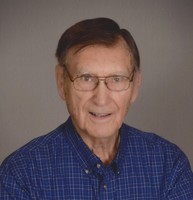