To share your memory on the wall of Yukie Rogers, sign in using one of the following options:

Print
Yukie (Nakagamaru) Rogers, passed away peacefully, at the age of 89, January 31, 2021, in Fremont, Nebraska.

Yukie (Yuki) which means snow in Japanese, was the last surviving child of eleven children, who grew up during World War II, sh... Read More
Yukie (Nakagamaru) Rogers, passed away peacefully, at the age of 89, January 31, 2021, in Fremont, Nebraska.

Yukie (Yuki) which means snow in Japanese, was the last surviving child of eleven children, who grew up during World War II, she lived at the foot of Mt. Fuji, in Fujiyoshida, Japan.

Yukie also performed traditional Japanese dance, and played the Koto, a 13 string Japanese traditional musical instrument, for the Texas dignitaries, including the Mayor of San Antonio, Congressmen, and Air Force Base Commanders.

Yukie was married to Master Sergeant Bobby Rogers, (retired United States Air Force, who passed away in 2012) for 50 years, and were blessed with two children, David and Tamii, both born in Japan. Yukie was bi-lingual and taught her children to speak Japanese at home, as they learned English in school. She was also blessed with six grandchildren and four great-grandchildren.

Yukie had been living with her son, David, and his wife Tammy in Fremont, Nebraska for the past 14 months. A traditional Japanese room was built for her in their home, where they felt honored, and blessed to have had her with them.

Funeral arrangements will be a customary Shinto service in Japan.

Receive notifications about information and event scheduling for Yukie

Print
Customary Shinto Service in Japan, at a later date.

We encourage you to share your most beloved memories of Yukie here, so that the family and other loved ones can always see it. You can upload cherished photographs, or share your favorite stories, and can even comment on those shared by others.

Erica Caldwell sent flowers to the family of Yukie Rogers.
Show you care by sending flowers

A Lady to Remember

In 1987, I meet Yukie through working with Defense Language Institute English Language Center protocol. As a new employee, I was told that she should be called to entertain the Japanese visitors coming to DLIELC. She would meet the Japanese dignitaries and speak their language while she served them the traditional tea.

After meeting her, I found her to be delightful and very hospitable. Every Japanese student who arrived seemed to know her and find their way to her home. Her house was known to be an open door for them to relax after class and she would prepare authentic food for all.

Of course, I was invited many times and enjoyed sitting on the floor and tasting her home cooking. Sometimes she would ask what I wanted and would cook it. She was a gracious host to my husband, then another time a lady friend, Maria Griffith, from work.

We talked about her visiting her home country and she was encouraging me to visit Japan with her, but those plans never developed.

Yukie was married for 50 years to Master Sergeant Bobby Rogers, retired USAF, who passed away in 2012. They had two children, David and Tamii, both born in Japan.

She and her husband, moved to San Antonio and became involved with DLIELC. It developed into their goal to help settle and host approximately 7,000 Japanese students with their families while attending DLIELC.

Because she devoted her life to serving her countrymen, she was recognized by the Generals of the Japanese Army, Air Force, and Navy for her years of volunteer work from 1980-2015.

Yukie was also involved with performing traditional Japanese dance, and played the Koto, a 13-string Japanese traditional musical instrument (pictured), for Texas dignitaries, including the Mayor of San Antonio, Congressmen, and Air Force Base Commanders.

Yukie (Nakagamaru) Rogers passed away, at the age of 89, on January 31, 2021, in Fremont, Nebraska. She was the last surviving child of 11 children, who grew up during World War II and lived at the foot of Mt. Fuji, in Fujiyoshida, Japan.

Yukie had been living with her son, David, and his wife Tammy in Fremont, Nebraska, for the past 14 months. A traditional Japanese room was built for her in their home. Her name Yukie (Yuki) means snow in Japanese.

She is just one of the many treasures that DLIELC has received and benefited from the cultural exchange and should be remembered. I will certainly miss her.

Posted Feb 05, 2021 at 10:19am
Our sincere sympathy on the loss of your mother. She sounds like she was a remarkable woman.
God Bless your family and keep the mepories alive!
Kent & Kim Custer
Comment Share
Share via:
EC 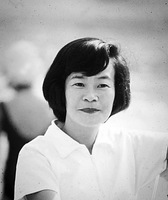