To share your memory on the wall of David Hamilton, sign in using one of the following options:

David was born September 11, 1927 in North Bend, NE to Roland and Audrey (Kendrick) Hamilton. He graduated from North Bend High School in 1944.

David married Sally A. Flora on February 12, 1950 in North Bend. They celebrated their 70th wedding anniversary on February 12, 2020. Dave farmed north of North Bend for nearly 50 years. In 1992, he was the recipient of a Nebraska Pioneer Farm Award, granted to individuals whose land has been in the family 100 years or more.

Burial will be at Purple Cane Cemetery in North Bend and a memorial service will be planned for a later date.
Memorials may be directed to the United Presbyterian Church in North Bend.

Receive notifications about information and event scheduling for David

We encourage you to share your most beloved memories of David here, so that the family and other loved ones can always see it. You can upload cherished photographs, or share your favorite stories, and can even comment on those shared by others. 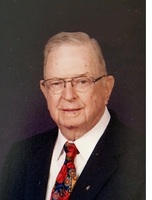