To share your memory on the wall of Denny Wilkins, sign in using one of the following options:

Print
Denny Wilkins, age 74, of Arlington, NE, passed away, January 7, 2021, at Nebraska Medicine in Omaha after a month battle of health complications as a result of COVID-19. He was surrounded by his four children that adored him.

Denny was... Read More
Denny Wilkins, age 74, of Arlington, NE, passed away, January 7, 2021, at Nebraska Medicine in Omaha after a month battle of health complications as a result of COVID-19. He was surrounded by his four children that adored him.

Denny was born December 21, 1946, in Fremont, NE, to Bob and Marian (Menking) Wilkins and grew up on the family farm in the Kennard/Arlington area.

He has been a farmer (soybeans, corn, alfalfa hay, cattle and hogs) in the Arlington area since he completed his education. He began farming with his father Bob Wilkins and has continued that legacy farming with his sons Ben and Brett. Denny married Charlene Ahlborg on March 24, 1973, in Millard, NE. After marriage, they farmed east of Arlington, on the original farm started in 1940 by Denny’s grandfather G.C. Wilkins.

Denny served on the Arlington Public School board from 1986-2001. During that time he was instrumental in establishing the Arlington Education Foundation. He also served on the Educational Service Unit #3 from 2002 up until his passing. In the Wilkins family he was a 3rd generation Superintendent for the Open Class Hog Show for the Washington County Fair for 25 years. He was a member of the Washington and Saunders County Cattlemen’s Association. Denny was a passionate John Deere antique tractor collector, having over 55 tractors (mostly antique). Denny was an avid NASCAR fan as well as a world traveler visiting 17 countries. He was a life-long blood donor, donating more than 12 gallons of blood.

He is preceded in death by his parents, Bob and Marian Wilkins and his grandson Alex Wilkins.

The funeral with live streaming at www.mosermemorialchapels.com will be held on Thursday, January 14, 2021 at 11:00 AM at Trinity Lutheran Church in Fremont with a graveside service following at the Arlington Cemetery.

Receive notifications about information and event scheduling for Denny

We encourage you to share your most beloved memories of Denny here, so that the family and other loved ones can always see it. You can upload cherished photographs, or share your favorite stories, and can even comment on those shared by others.

Naomi, Yoshi, Solana and Amana Fujikawa, Zach Heath, and other have sent flowers to the family of Denny Wilkins.
Show you care by sending flowers

Posted Jan 14, 2021 at 11:34am
You are in our thoughts and prayers. Wishing you peace, comfort, courage and love through this time of sorrow. Our prayer lamps are lit for you all. I have so many memories from my childhood of meeting Denny, Char, Brett, Ben, Brittany, and Brianne at the annual college friends reunion as well as memories of the family stopping by our farmyard with their camper in the summers. We are happy to make a donation to Arlington Education foundation in Denny's name.
Comment Share
Share via:
LH

Posted Jan 13, 2021 at 11:19pm
Thinking of you and wishing you moments of peace & comfort . We celebrate the life of a great man and mourn his passing with you.

Posted Jan 13, 2021 at 09:09pm
Wishing you peace to bring comfort, courage to face the days ahead and loving memories to forever hold in your hearts.

Flowers were purchased for the family of Denny Wilkins. Send Flowers

Posted Jan 13, 2021 at 03:25pm
Dear Brittany, Please accept our most heartfelt sympathies for your loss... Our thoughts are with you and your family during this difficult time.

Posted Jan 13, 2021 at 11:54am
My sincere condolences for the loss of a good man in Denny. My prayers have gone out to all his family and loved ones. With love Bill Ahlborg
Comment Share
Share via: 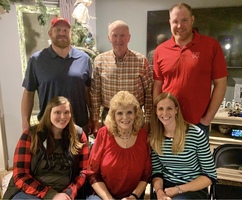