To share your memory on the wall of Keith Main, sign in using one of the following options:

Print
Keith A. Main, age 62 of Fremont died Tuesday, February 16, 2021 at his home with his wife and constant companion Calli by his side.

He was born August 11, 1958 in Fremont, the third son of Virgil and Jeannine (Thompson) Main. In 1961, the family moved to the house in the Davenport Addition that they built and owned until his dad’s death in 2013. He attended Fremont Public Schools and graduated in 1976.

Keith’s tenacious attitude and strong work ethic was instilled in him from his parents. They taught the boys that if you were going to do anything you should do it right and when you say you will. They were a very close family that enjoyed playing sports, cub scouts and taking summer vacations.

Keith’s favorite memories were hunting with his dad, brothers, and friends, Charlie, Dave and Mark Orr. He loved being outside and enjoying the beauty of nature until his love for animals made him realize he couldn’t do it anymore. He was never without at least one dog and even had 3 at one time. When Keith gets to the Rainbow Bridge he is going to be attacked by his many four-legged children. He was a total Ford fan and owned and restored many cars and especially Mustangs. He built a 1928 Model A Street Rod from the ground up, that he sold at a Barrett Jackson Car Auction in West Palm Beach, Florida.

Keith reunited with Judi (Bales) in 1993 and they married June 25, 1994 in his parent’s backyard. They attended many NASCAR races and vacationed in the Midwest. Keith adored his children and granddaughters and loved sharing his passions with them. He loved swimming with the little girls in the backyard pool, taking them shopping and having tons of fun at “Great Wolf Lodge” in Kansas City.

Keith was a welder, fabricator, toolmaker and Mr. Fixit that could fix anything. He worked in manufacturing at Kelly Klosure, R K Aerials, Overland Products Co. and finally Timme Welding retiring in 2020.

He was preceded in death by his parents, brothers, Dennis and Rick Main and in laws Joe and Carolyn Bales.

Receive notifications about information and event scheduling for Keith

We encourage you to share your most beloved memories of Keith here, so that the family and other loved ones can always see it. You can upload cherished photographs, or share your favorite stories, and can even comment on those shared by others.

Posted Feb 22, 2021 at 01:29pm
Grew up with Keith in the Davenport addition area. He was a member of the "Davenport tribe" . Our lives passed many times I would occasionally stop by to play guitars or see what car he was working on at the time...he was mister fix it.Very talented guy. We had some great times. Rest in peace Keith...You are suffering no longer. Our thoughts and prayers are with you all.
Comment Share
Share via:
MS

Posted Feb 19, 2021 at 07:41pm
We are so sorry to hear about Keith. He was always so nice to us and a very friendly guy. Judy and family you are all in our thoughts. Our Sympathy Vicki Baldwin and Hannah Sillau
Comment Share
Share via:

Posted Feb 18, 2021 at 06:16pm
So sorry to hear of your loss, Keith was a great guy and always had a smile on his face. Our thoughts and prayers are with you all at this time. Sheila Vornbrock (Hunke)
Comment Share
Share via:

Posted Feb 18, 2021 at 09:27am
Condolences to the family & friends. Prayers & thoughts are with you all. So sorry for your loss. I've know Keith since we were kids. He was a great person. May God bless you all. 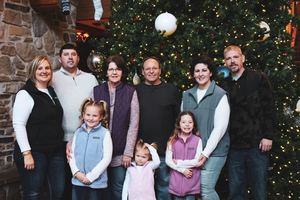